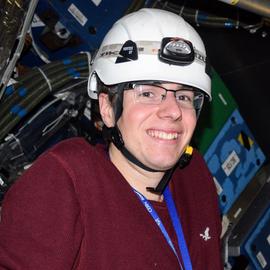 Hi, my name is Anthony Bisulco and I am a PhD student in Electrical and Systems Engineering at the University of Pennsylvania working on robotics, machine learning and hardware systems. Previously, I was a machine learning research engineer at Samsung Research America in the Samsung Artificial Intelligence Center(SAIC) NY. This website is devoted to my various personal projects and blog. If you have any feedback on the work in this portfolio, please feel free to contact me at arb426@cornell.edu

This paper presents a Dynamic Vision Sensor (DVS) based system for reasoning about high speed motion. As a representative scenario, we consider the case of a robot at rest reacting to a small, fast approaching object at speeds higher than 15m/s. Since conventional image sensors at typical frame rates observe such an object for only a few frames, estimating the underlying motion presents a considerable challenge for standard computer vision systems and algorithms. In this paper we present a method motivated by how animals such as insects solve this problem with their relatively simple vision systems. Our solution takes the event stream from a DVS and first encodes the temporal events with a set of causal exponential filters across multiple time scales. We couple these filters with a Convolutional Neural Network (CNN) to efficiently extract relevant spatiotemporal features. The combined network learns to output both the expected time to collision of the object, as well as the predicted collision point on a discretized polar grid. These critical estimates are computed with minimal delay by the network in order to react appropriately to the incoming object. We highlight the results of our system to a toy dart moving at 23.4m/s with a 24.73° error in θ, 18.4mm average discretized radius prediction error, and 25.03% median time to collision prediction error. 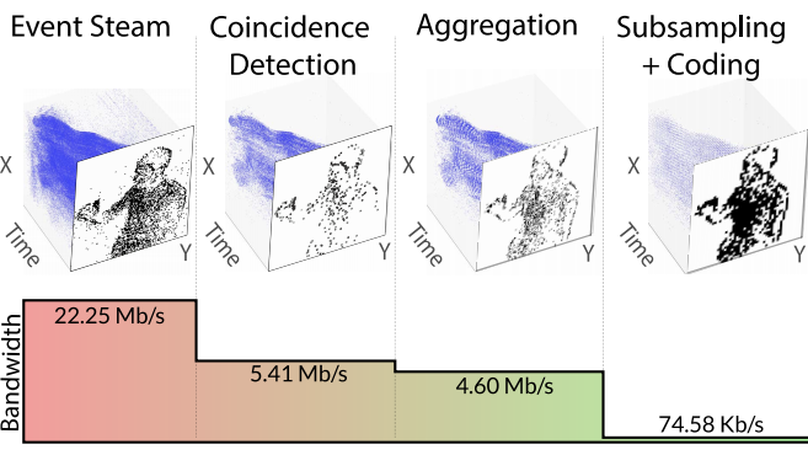 This paper presents a novel end-to-end system for pedestrian detection using Dynamic Vision Sensors (DVSs). We target applications where multiple sensors transmit data to a local processing unit, which executes a detection algorithm. Our system is composed of (i) a near-chip event filter that compresses and denoises the event stream from the DVS, and (ii) a Binary Neural Network (BNN) detection module that runs on a low-computation edge computing device (in our case a STM32F4 microcontroller). We present the system architecture and provide an end-to-end implementation for pedestrian detection in an office environment. Our implementation reduces transmission size by up to 99.6% compared to transmitting the raw event stream. The average packet size in our system is only 1397 bits, while 307.2 kb are required to send an uncompressed DVS time window. Our detector is able to perform a detection every 450 ms, with an overall testing F1 score of 83%. The low bandwidth and energy properties of our system make it ideal for IoT applications. 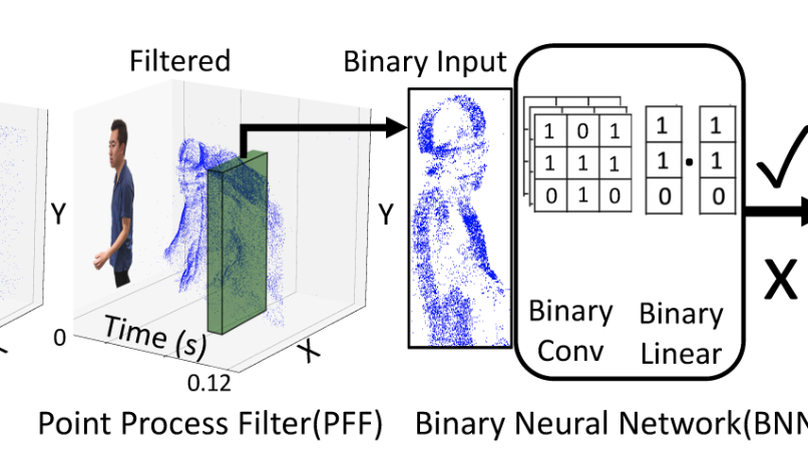 In this work, we present a hardware-efficient architecture for pedestrian detection with neuromorphic Dynamic Vision Sensors (DVSs), asynchronous camera sensors that report discrete changes in light intensity. These imaging sensors have many advantages compared to traditional frame-based cameras, such as increased dynamic range, lower bandwidth requirements, and higher sampling frequency with lower power consumption. Our architecture is composed of two main components: an event filtering stage to denoise the input image stream followed by a low-complexity neural network. For the first stage, we use a novel point-process filter (PPF) with an adaptive temporal windowing scheme that enhances classification accuracy. The second stage implements a hardware-efficient Binary Neural Network (BNN) for classification. To demonstrate the reduction in complexity achieved by our architecture, we showcase a Field-Programmable Gate Array (FPGA) implementation of the entire system which obtains a 86& reduction in latency compared to current neural network floating-point architectures. 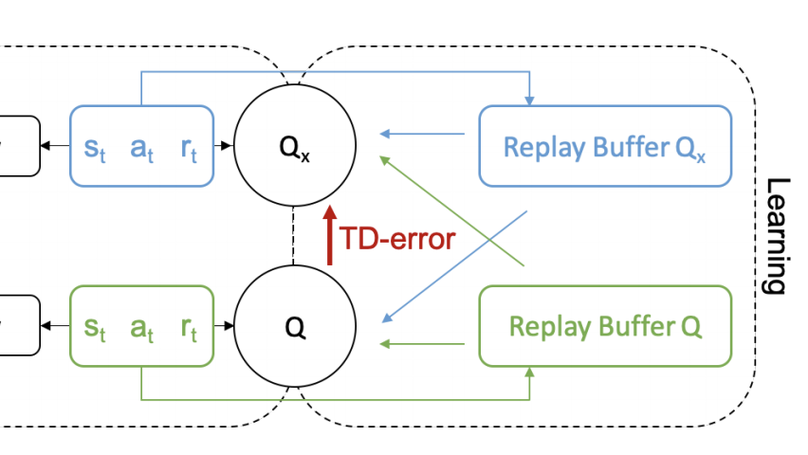 Reward Prediction Error as an Exploration Objective in Deep RL

A major challenge in reinforcement learning is exploration, when local dithering methods such as epsilon-greedy sampling are insufficient to solve a given task. Many recent methods have proposed to intrinsically motivate an agent to seek novel states, driving the agent to discover improved reward. However, while state-novelty exploration methods are suitable for tasks where novel observations correlate well with improved reward, they may not explore more efficiently than epsilon-greedy approaches in environments where the two are not well-correlated. In this paper, we distinguish between exploration tasks in which seeking novel states aids in finding new reward, and those where it does not, such as goal-conditioned tasks and escaping local reward maxima. We propose a new exploration objective, maximizing the reward prediction error (RPE) of a value function trained to predict extrinsic reward. We then propose a deep reinforcement learning method, QXplore, which exploits the temporal difference error of a Q-function to solve hard exploration tasks in high-dimensional MDPs. We demonstrate the exploration behavior of QXplore on several OpenAI Gym MuJoCo tasks and Atari games and observe that QXplore is comparable to or better than a baseline state-novelty method in all cases, outperforming the baseline on tasks where state novelty is not well-correlated with improved reward. 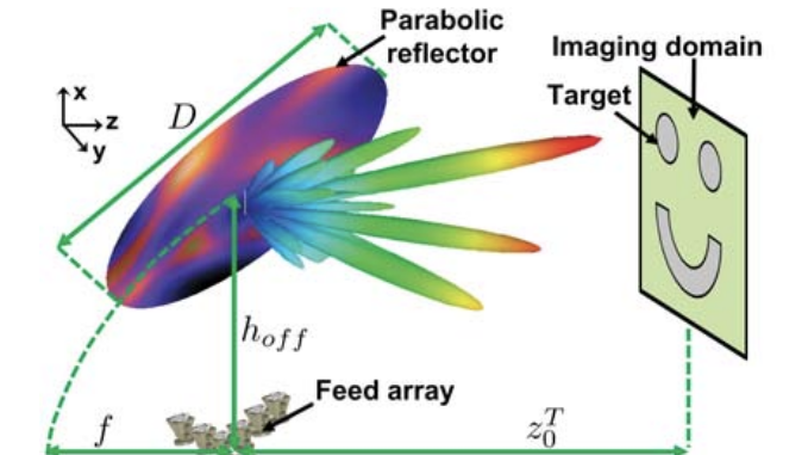 This paper presents a new millimeter-wave sensing system used for near-field imaging applications. The presented system is composed of a parabolic reflector which is fed by an array of compressive antennas. A Compressive Horn Antenna (CHA) is manufactured by inserting a dielectric piece with a pseudo-random geometric pattern inside a Pyramidal Horn Antenna (PHA). The presented CHA is capable of performing spectral coding, which is of special interest for high-sensing-capacity applications. The antenna is fabricated using additive manufacturing (3D printing) techniques and then spray coated with silver. Near-field measurements are carried out in the near-field region of the antenna. The measured fields are then compared with those of the full-wave simulations to validate the performance of the fabricated antenna. Using the surface equivalence principle, the electric and magnetic fields at the aperture of the horn antennas are used to calculate the equivalent radiating electric and magnetic currents. These currents are then integrated to an in-house physical optics-based solver to feed a parabolic reflector and image metallic scatterers in the near-field region of the system. Numerical simulations show that the imaging performance of the reflector fed by the CHAs outperforms those of the reflector fed by PHAs.